Anachronism has often been defined as a ‘sin’ for historians, often the worst sin that a historian could commit, a ‘capital sin against method’, as Nicole Loraux described it. But what historians mean by anachronism, and whether they believe it is possible to avoid it, are much debated. One of the first tasks for our research project has been exploring these debates and thinking about their implications. But not all contributions to the debates reject anachronism. Nicole Loraux wrote ‘in praise of anachronism in history’, in an article first published in 1993; she treated it as a necessary consequence of engagement with the past that the good historian should acknowledge anachronism as part of their awareness of the relationship between their own present and the past that they are studying.

Her thoughts were inspired both by a seminar series on the topic as it related to the modern use of antiquity, and her own responses to the methodologies prevailing in French historical studies at the time. She argued that the act of making a connection between the present time of the historian and the past of the period under study will inevitably involve the use of analogy, which will in turn lead to some form of anachronism. Careful, reflective use of such analogies might be necessary to understand the past; anachronism will arise whenever the present becomes the most effective means of gaining an understanding of the past.

Loraux had earlier followed the methodology of the ‘Paris School’, whose methodology emphasised the great distance between the Greeks and us, the difference between their conceptual world and ours, and the benefit of anthropological approaches to this strange and distant society. This approach was intended as a criticism of humanist approaches to history, in which the idea of a universal and constant human nature was taken to underlie human choice and action in different societies, and as an anthropological approach. The difference that belied universality was emphasised through historical practices, such as exploring Greek concepts (Loraux cites meson, metis and peitho) but leaving them untranslated to emphasise their distinction from modern concepts.

Loraux at first adopted this methodology, but began to find it unsatisfying; if we had so little in common with the Greeks, how could we understand them? And in using their language, could we be sure that we were leaving behind the interpretative traditions that mediated our access to them – was it possible to forget the way in which our view of antiquity had already been shaped by the thought of Nietzsche and Freud? Loraux found her thoughts expressed in the methodological reflections of an earlier French historian, Marc Bloch, who argued that, while the idea of an unchanging ‘man’ should be rejected, and the effects of changing material and social circumstances recognised, there must be some commonality and continuity if there is to be a meaningful engagement with the past.

If one cannot make contact between one’s present concerns and the past, studying it becomes an exercise in depoliticised antiquarianism. But if one is studying the past to explore one’s views about some issue of concern in the present, there are many pitfalls to beware. What is needed, Loraux argued, is a practice of ‘controlled anachronism’ in which the researcher acknowledges their intentions and the analogies they construct, the questions they ask which the Greeks would not have asked themselves.

Loraux thought that the study of Greek democracy might benefit from this practice. She showed how anachronisms of various kinds crept into writing on it – the unreflective use of modern terminology for class conflict to describe a pre-capitalist society, the problematic question of what ‘public opinion’ might mean in the context of the ancient city, the changing value of the word ‘democracy’ itself from ancient to modern times. One’s aim in exploring the ancient city might be to make a point about the modern one, as she suggests Vernant was doing in emphasising the importance of open debate in Athens and its democracy.

Loraux herself, in this self-reflective study of her methodology, was able to show how the political circumstances that affected her own life informed the research questions she chose to pursue. She began to think about the topic of political amnesty after reflecting on Président Pompidou’s controversial 1972 pardon of Paul Touvier, a police officer in the Vichy régime of World War II; she found new interest in the amnesty put in place by the restored democracy of Athens, and the effort to rebuild the city by forgetting acts performed under the oligarchy of 404-3 BCE. While her exploration of the Athenian civil war and subsequent amnesty can be read without reference to contemporary politics, readers might well make connections to their own political experiences.

As evocations of ancient democracy and its practices have multiplied in the analysis of the political events of 2016, Loraux’s analysis might provide guidelines for making effective connections between past and present, and assessing the intentions with which such analogies and connections are made.

From the window of the Anachronism and Antiquity project office we can see the eighteenth-century Radcliffe Observatory, one of the more remarkable buildings of Oxford’s architectural heritage.

From the window of the Anachronism and Antiquity project office we can see the eighteenth-century Radcliffe Observatory, one of the more remarkable buildings of Oxford’s architectural heritage. The eight-sided tower and its sculptures of the winds consciously evoke Athens’ octagonal Tower of the Winds, a Hellenistic structure that has survived largely intact, albeit stripped of its equipment. The original purpose of both buildings, and the instruments they housed, was to assist in measurement, whether through the mechanisms of water clocks and sundials (Athens) or through telescopes and other instruments enabling observations of astronomical phenomena (Oxford).

The Tower of the Winds, Athens 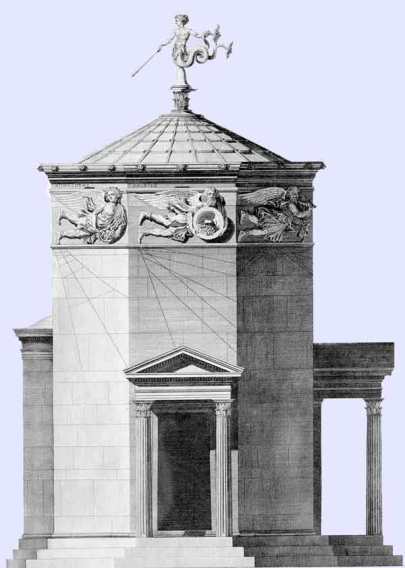 The tower illustrated by Stuart and Revett

Looking from the window of our less distinguished post-war office building, we can see the eighteenth century tower as a link between present and past, suggesting both the desire for cultural continuity between antiquity and the modern world, and, through its adaptation of the original, differences and disruptions between the two, that one cannot recreate the past without change. The change in scale and disrupted proportions of the newer building exemplify the shifts in emphasis and understanding that mark historical inquiry, as the object of observation is distorted by changes in focus and interest, and what was small (as the original Athenian tower is) may become large (as the Observatory is) in its reception and recreation.

The Radcliffe Observatory’s obsolescence as a place of scientific activity is also a reminder that perspectives and paradigms are subject to shifts and changes; most of its equipment is now housed in a museum. One of our questions is whether such shifts took place within ancient historiography, and how the consciousness of different temporalities affected historical and political analysis.

While some have argued that the concept of anachronism is a modern one and unknown to ancient writers, we are finding examples of the sophisticated manipulation of time and temporality in ancient texts, and indeed in ancient commentary on objects and practices that seemed ancient to them. The Athenian Tower of the Winds in the Agora reminds us that time and its measurement were a concern of both ancient science and engineering and of everyday life. The presence of the figures of the eight winds on both buildings connects timeless myth with the conscious and scientific measurement of time and space.

Engagement with antiquity can assert novelty as well as an antiquarian respect for cultural authority. The Radcliffe Observatory’s architect James Wyatt, in modelling his observatory on an Athenian building, was responding to the latest contemporary fashion. The details of the older tower’s structure and its sculptures had recently been featured in Stuart and Revett’s Antiquities of Athens, first published in 1762. Wyatt produced a great many solid neo-classical buildings in Oxford and elsewhere (including a Pantheon in London’s Oxford St), but was no stranger to architectural fashion and experiment. The altered proportions and scale of the Radcliffe Observatory, compared with its ancient original, perhaps hint at the extremes he would demonstrate in later buildings such as the Gothic Revival Fonthill Abbey, with its magnificent but short-lived tower.

Uncovering the complexity of ancient engagement with time, temporality and history, will be at the heart of our research activities over the next three years. We can take inspiration from Wyatt’s re-use of the past, and the collaborative efforts of Atlas and Heracles, holding up the world on the top of the tower.

The blog of the Anachronism and Antiquity project, based at the Faculty of Classics, University of Oxford, during 2016-19, and funded by the Leverhulme Trust. We will be adding regular updates on our research and news of our project publications.